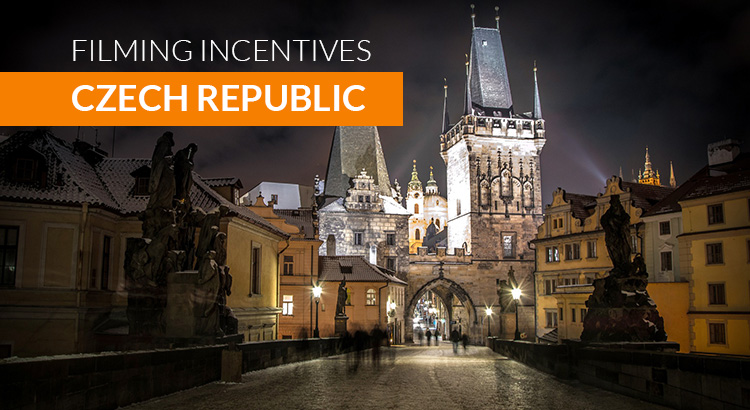 Earlier this year the Czech Republic introduced new filming incentives in an effort to boost its already booming international film production. Nestled in the heart of Europe, the Czech Republic often attracts foreign production due to its ability to double for more expensive cities like Paris and London. Plus, access to highly experienced, local crews and stunning locations make it a worthwhile destination for your next filming project.

In 2010, the Czech government introduced an incentive scheme offering a 20 percent cash rebate on qualifying local spend, plus an additional 10 percent for international spending that applies to film and TV, including all postproduction work.

To continue boosting the international film sector, the Czech government approved an amendment to the audiovisual law in May of 2016 that allows applicants to file for a rebate any time of the year.

Also, the National Fund of Cinematography allocated an additional $33 million more per year from the state budget over the next three years. The new incentives will take effect on January 1, 2017.

Since the rebate was introduced in 2010, the Czech government has paid out more than $80 million in rebates to more than 150 film and TV projects.

More on the Horizon

On September 15, Prague’s city council approved a new fund called “Prague in Film,” which provides financial support to both feature films for international distribution in cinemas as well as for TV movies and series to be broadcast on foreign television stations. The essential condition is that the project portrays Prague as herself, and not as a stand-in for another city.

The Czech government is also in talks to raise the cash rebate to 25 percent in effort to remain competitive. However, no word whether this will happen soon.

Local Crews in the Czech Republic

The Global Media Desk provides the finest, most respected, local production professionals in the Czech Republic. Your satisfaction is our number one priority and that is why we never sacrifice on quality. No matter what you are looking for, we have the best local production services for you — from single technicians to large, fully-equipped crews for preproduction, production, and onwards through to post. Fill out our free online quote to find out how we can help you with your production needs.

Here are a few of the big international TV and film productions currently shooting in the Czech Republic:

Knightfall for History Channel chronicles the events leading up to the persecution, downfall and burning at the stake of the Knights Templar.

Anthropoid wartime thriller based on a true story of the assassination of Reinhard Heydrich, the SS general who was the author of the Nazis’ “Final Solution”.

Let us help! At the Global Media Desk we specialize in bringing your visions to life. We only work with the top regional professionals in such varied fields as video production, photography, and film & video crews. Please contact us with any questions you may have about shooting in the Czech Republic or any country around the world. You can also request a free online quote to see how we can make your project a complete success.

Follow us on social media for news, advice, info, and tips about international film production, photography, and language services: